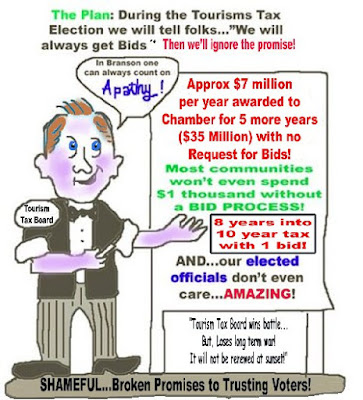 Mindy Honey of the Branson Daily News committed a break from usual format by reporting John Logan's concerns regarding the no-bid contract handed to the Branson Chamber of Commerce last month.

Press politics greatly dictates how stories are reported in and about Branson. Generally, In Branson tourism is subsidized through several sales taxes, funneled to a private business organization, the Branson Chamber of Commerce, and sub-contracted to out-of-state vendors. In turn, most of our media outlets are subsidized by the geo-political entity. (More on this later)

A pyramid of entities dictates how the funds are allocated and supervised. The Convention Visitors Bureau is one such entity managed by the Branson Chamber of Commerce with a five year budget estimated at $35 million in scheduled revenue from the TCED tax and additional $12 million from the city itself. The TCED district tax expands from Eastern Stone to Western Taney County.

In addition, the Branson Board of Alderman granted a 5 year contract to the Branson Chamber of Commerce to manage the City of Branson's tourism tax with an estimated value of $12 million.

*The Branson Board of Alderman have depleted 5 million in savings since Branson's Mayor Raeanne Presley was elected mayor. The deficit spending occurred during three years of record income for the city of Branson. 2009 was the second highest sales tax revenue producing year in the city's history.
Prepared by: Unknown