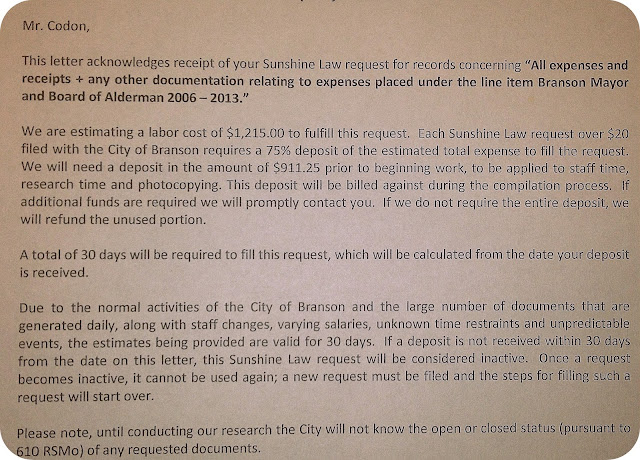 Mayor Reaeanne Presley has for nearly 5 years priced public records out of the market to hide the inconvenient truth about her use of public funds for personal gain. (Call for Presley To Find Jesus at Bottom of Page)

The document above attests to the character of our Mayor Raeanne Presley and her lack of openness regarding personal use of public funds . While some press outlets with no use or need for ethics reprint political claims about Branson promotion suggesting the ludicrous notion Presley supports open government.
Only documents which Presley wants the public to see are printed and often buried in large file sizes online. .

Presley has spent millions she doesn't want the public to know about and these documents are intentionally hid from the public. Through use of tax dollars Presley has sent a strong message to press outlets - dare to report and your rights will be violated (she's had me felt up on several occasions without cause).

I've come to the conclusion that I don't need an attorney to exercise my civil rights. I can disregard an illegal verdict delivered by a inept politician because I live in America - Not Presleyville.

I've watched Presley spend millions of public funds on ridiculous legal actions failing most every time. Instead, I hereby command Mayor Raeanne to respect - obey -  the Constitution of the United States of America and to quit urinating on the documents great men have fought and died for. If she doesn't like being held accountable, I don't care. I have a public to serve and the Presley showtune shack is a very small, almost insignificant part of it. Too many have fought and died for this country and by golly I'll use that Constitution to help my fellow man understand how his (not Presley's personal bank account) tax dollars are being used.

I'll walk into a public meeting anytime I want and no I don't have to report to a crooked leader's armed men to do it.. I refuse to be illegally detained just because a city leader isn't intelligent enough to handle the scrutiny.

I don't need an attorney to tell me it's ok because I'm an American. I have a responsibility. I have a responsibility to my family to make a living and to the many refugees living in Branson from Russia, Iran, Bulgaria, Ukraine and China who stay quiet during political discussions because in there countries people like Presley will harm them should they speak.

I'm an American and a child of the almighty. These two identities are far more important than the ill-educated nit-wit who thinks they can detain me just because they don't like me being there. I tell a truth that is inconvenient to immoral leadership that is no better than a filthy rag.

I don't need a note from my mommy, the governor or a lawyer to enter public property. The price for such freedom has already been paid. Raeanne Presley is nothing more than a private citizen  - not a God able to take away civil liberties. I assure you I have a greater God void of the filthiness so prevalent at city hall.

In the end it is the will of the people that will reign and they need access to information, not just the exact fax setn to KY3 headquarters for distribution. I don't believe that the citizens of Branson would have let Presley walk-in to an election unchallenged if she had to be held accountable for her actions. It is the job of the press to give the information the public needs to remain free and self governed. The people need custodians of fact - not business partners in Preslredicunomics.

On a personal note I have an apology to make to the public. I am very sorry that I have let Ms. Presley use means of terror to slow down my reporting. Our constitution is a very powerful document that withholds all mankind has unalienable rights. Prior to the founding of the United States evil leaders issued edicts used to rape civil liberties from individuals they don't agree with. I realize my diatribes promoting public integrity aren't beneficial to Presley and her policy of "never seeing a conflict of interest she wasn't willing to profit from". I realize that Andy Williams marching down 76 in a parade of stars didn't either. I realize having a black rapper from St. Louis (Nelly) didn't help her private business. But making laws to stop black people or nationally respected entertainers from performing in public is unacceptable.

It's important to note that the City of Branson has made some transitions that have made the corruption led by our current Mayor Raeanne Presley and her reign of terror on the Branson economy possible. This is a major transition from Branson's innovative leadership before she took office.. They managed to save over $14 million which Presley has mostly drained. Where they opened the doors for economic growth Presley has taken great action to shut them. Where entrepreneurial activity was encouraged, Presley stifled and creates legislation making innovation illegal. They even loved America and respected Constitutional Rights - fought for by non-Presleys in battlefields across the world. We have never had a leader with such disregard for the Constitution of the United States which is why I can correctly call Mrs. Presley a person who actively disregards American values. Dressing in sequin sparkled suits and singing show tunes does not make one a patriot.

Prior to her taking office we had a very active press. An avid and inquisitive watchdog press that once defined Branson's journalistic tradition has dissipated. The most profound transition and visible change began with the Springfield News Leader closed their Branson offices. The reporters that use to monitor city hall retired. Presley hasn't had to be accountable, as sure as their is an almighty - this will change.

Media competition is very important for the political landscape. Men sharpen men and editorial standards rapidly declined once Branson City Officials no longer had to deal with ethics common to the American press tradition. The unholy alliance with Schurz communication exasperated the problem bringing the television stations KY3, KSPR and Branson's Mayor under a common umbrella. The perverse media alliance is unheard of in America and may be a catalyst for the corruption and fallout Branson residents will have to incur for generations to come. As a former leader in the advertising industry I've been able to extrapolate that millions in false reports (documentaries running daily on KY3/Presley Curruption TV aka Branson Visitor Television boosting the Presley Theater far above their importance to Branson's economy and history) and the unfettered press releases published by KY3 and KSPR weekly touting Presley's integrity (a laughable claim) have boosted Presley into a position where the city is able to be managed in a third-world banana republic style dictatorial fashion.

Because Presley has had no accountability, false reports are commonly delivered through partners in the press for public consumption. I have noticed seven flaws of our mayor that show the character of our current goofball style leadership and have come to the conclusion it's not all our mayor's fault. Presley lacks the education and real world experience most people in her position have had. If Presley could correct these seven character flaws ; perhaps she could grow to become a semi-adequate leader.

Since you constantly cyberstalk me I know you're reading this. I'm sorry if my promise to hold you accountable hurts your pocketbook or feelings but there is something far more important. I want you to find Jesus. I know there is a lot of talk about this character and you can hear songs for 55 bucks a pop at your personal business. But let's get real - it's not just a concept to make a dollar off of.

You can read about it in a book called the Bible - it's in the last part titled New Testament. Now I know you don't have much in the way of education - but don't worry about that - have someone read it to your out-loud.  there are plenty of educated men with little sense (no one is judging you here). There is a character in the book you might relate to named King Herod. Like you, he's a public leader with little integrity  - believe it or not - he's even worse !

Maybe that is why God put this character in the book to teach dishonorable leaders that they can repent and do better.

You'll read about two guys Herod didn't like. One guy has the same name as your son (nice kid by the way -seriously) . This guy John is pretty cool. Unlike Jesus this guy John shows up in the main historical archives. John was critical of Herod - he speaks against Herod - tells people what a bad dude he is.

Back then where Jesus lived they didn't have a Constitution. Herod does what you do when someone disagrees with you and sends out cops to harass him. Anyway this crooked king is friends with the priests (they call them Pharisees and Sadducees) who work with crooked reporters (called scribes) that do whatever the king tells them.
Jesus is good friends with this guy John and after the king has him killed (don't be jealous, Kings had a lot of power back then - again, no constitution) Jesus cruises around speaking about public policy and God-given rights. They send lawyers to verbally battle him but it's no use - he's too good at public debate.

Well, the leadership has him killed - but he ends up being the Son of God and the actions of these crooked politicians who use tax dollars to try to stop are to no avail - he wins anyway. It's a very good book, you ought to take it for a spin.

Jesus is the way to our father-in-heaven (God) and you can ask for repentance  Money laundering, using tax dollars for private gain, lying to the public and the plethora of immoral things that may haunt your heavy heart can be lifted. You could find some relief as you must now know that ill-gotten gain doesn't bring joy.

Now, you know I can't disrespect my country and family by respecting these ridiculous notes creating laws that only apply to me. Yes, I know, it's rare to find a reporter with courage enough to be more than a personal scribe. There would be more if they knew the joy in serving their fellow man.

There is another document called the constitution  - while one is optional , you'd be wise to read the other one. Anywho - these illegal edicts are pretty tiring but I've seen you do enough foolish things with the public trust that I have to say something. I'm a peaceful guy with a knack for juxtaposing words and I know you don't like it. You'll have to deal with that. But the pain in your heart from the things you've been doing - these can be healed. And I truly hope you do find God and I hope one day you find the joy of truly serving the people.