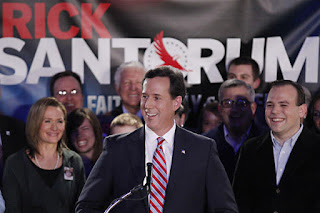 They say politics is sports for geeks and those of us who watch political matches closely are coming off a high from the Cinderella story from Iowa's Republican caucuses. The ultimate retail politic match brought Rick Santorum to the spotlight from a single digit approval rating for months leading to the caucuses producing far right social conservative friendly former Pennsylvanian Senator Rick Santorum into the spotlight..

For Taney County residents this brings an evangelical approved potential candidate for an area that mirrored Iowa in 2008 vying support for Baptist Preacher Mike Huckabee. Overall the potential for a brutal battle for the Republican nomination is good news for Obama. This is an excellent time for Republican's in the field to make a deal.

Gingrich and Romney publicly exchanged warm fuzzies , with backhanded assaults on Romney insinuating brutal weeks ahead while stating they were going to keep the fight clean.