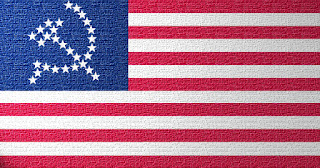 At Branson City Hall last night a citizen begged officials over the right for permission to  fly a US flag. A special section to allow flag flying (which can be done with certain stipulations due to a modification of an amendment blocking outdoor expression) Branson's mayor Raeanne Presley provided an acid test, "it depends on whether or not the item is being sold inside".

Debate over intent was initiated in light of citizen concerns over a new ordinance which is part of a $500,000,000 plan to alter the face and mix of businesses in Branson over the next 18 years.

An infrastructure upgrade focusing on aesthetics compromises a large percentage of the plan. The questions are: How far will these ordinances will go and at what point did commercial speech become tantamount to yelling fire in a crowded building ?

Last nights meeting has a summary document spanning three hundred and one pages and over 700 total. (The 301 page summary is posted here.)

In a sense it's a battle of civilizations.

Branson's mayor Raeanne Presley is part owner of a theater whose entertainment features a wardrobe that could raise Liberachhi himself from the grave for a post mortem catfight. And while the Presley model of entertainment is undeniably tacky, it's a unique form of gaudy and a theme that some think the city should enforce city-wide. The totality includes legislating  facade, structure style , perhaps,entertainment itself. Some entrepreneurs believe the far reaching attempt to redesign Branson favors a style that is in major decline as it appeals to an older dying population.

One idea proposed is an 1800's them which is in contrast to a giant replica of the Titanic,  a three story chicken and a gorilla atop the Empire State Building would require businesses to adopt a similar architechture style.

The antithesis is the innovation that is changing the face of Branson which some want to halt.

The antithesis is Route 66 subculture themed establishments have fared well. The gorrilla yielding a reported 350% increase in gains Under new ordinance Presley has a right to review free speech if there is a possibility of financial gain. 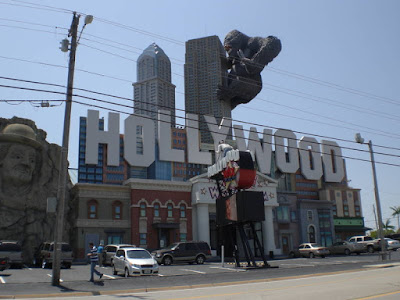 While over 2,000 pages of anti-business legislation  is produced monthly; those impacted are losing revenue.

The mayor who boasts marital relations with one of  the first Branson dynasties to build a road side attraction is on the decline.

While sales tax for theaters are dropping Presley was smart enough to diversify launching a cable channel with a lease from a regional media provider.

The expanse of subjectively regulating business on private property took to a head when the right to assemble was met with conflicting regulation halting the performance of a famous black entertainer. The apparently racist provision went with support of the censor. In sharp contrast the infamous Westboro Baptist Church was presented a permit almost immediately when they chose to peddle their message in public.

Presley's assault on the 1st Amendment has been continual. As explicit action is taken to deny public access to records and procedures which regulate such basic American traditions and guaranteed rights - such as that to assemble and communicate freely I'm amazed that our patriotic citizens seem too timid to make a stand.

In China, Russia, N. Korea and Iran national flags are flown with governmental approval. In Branoson's America you can fly the flag with the mayor's permission. While it is nice that Mayor Presley isn't taking this specific right while denying the rest of the 1st Ammendment there is a clear reality.

You can fly the flag in Branson it's just illegal to practice the principals the flag stands for and the US Constitution seems to guarantee.