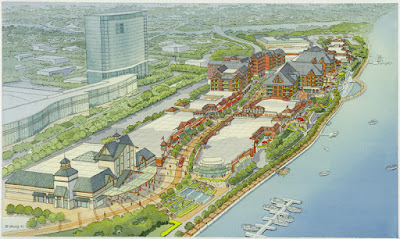 The Editorial published below is a precursor article to several stories and documents that will be published over the next few days in regards to the Branson Landing case involving Empire District Electric, the city of Branson and Doug Coverdell. The case has many interesting components that make it unusual. The most interesting is the coverup. Stories about the court filings and eventual jury verdict granting a large portion of the Branson Landing to Doug Coverdell have been uncovered despite the efforts of officials.

Seven years passed before a Taney County Jury ruled Doug Coverdell was the rightful owner of nearly a third of the Branson Landing. Neither the city of Branson nor Empire District Electric could have imagined a private individual could fight off a machine willing to spend millions to deter justice.

Branson city officials have made a choice.

Instead of saying, “I'm sorry for trying to steal your land, here's a  reasonable sum for the property you own, thank you for your generosity and kindness in the wake of our massive perversions” they have chosen to give the finger to Coverdell and to the citizens of Branson at a cost of an assumed million dollars. With each act of arrogance the check citizens will have to pay rises.

Well funded giants do not fear acting wickedly knowing a massive pocketbook can punish men of humble means through extended appearances in our halls of justice.

Heroes like Erin Brockivich are rare. More common are the citizens who suffer at the hands of mighty corporations and governmental bodies. Real politic dictates the most powerful make the rules whether right or wrong.

The case of Coverdell Vs. Branson is truly a Cinderalla story. As midnight approaches the spell is fading. The Southern District Court of Appeals has had its patience tested rejecting thrice the incompetent filings from the finest legal counsel money can buy.

For the city of Branson time is running out, their only hope is to reset the clock.

As if in a contest to see how much of the city coffers Presley can spend, Missouri Supreme Court Justice John Holstein has been hired by the city of Branson.

Former Chief Supreme Court Justice John Holstein was once the most powerful man in the state. His dissertations read like poetry as he advised Missouri's Senate and House of Representatives in 1997 about the sacredness of a jury's suppositions asserting:

"The jury trial has served us well. It is a marriage of the best of our legal system and of democracy”

But even with his unmatched highly priced legal knowledge; It's hard to grasp why Holstein cannot seem to prepare a proper filing with the Court of Appeals.

It is a testament to the integrity of Missouri's Southern District Court of Appeals that rule of law trumps the status of a man. True justice is blind - no respecter of men. The court was unwilling to compromise principal for a modern aristocrat.

But Holstien's role as a father is of curiosity and perhaps should come into question among Branson's citizenry.

It is well known that Raeanne Presley attempted to sue the city of Branson several times for a variety of reasons before becoming mayor. Her hatred for Branson made Holstien's son-in-law a target. Presley's waterboy Gary Groman wrote many endearing public statements about Holstein's son-in-law which were published weekly by Ozark Mountain Newspapers. One of the more reverent statements made suggested Holstien's son-in-law Paul Link “pissed on Branson's citizens daily” with cohort Branson City Manager Terry Dody. Presley could never beat him as a citizen fighting against the city of Branson.

In fact, it was a campaign promise of Presley to fire Holstein's son-in-law, which she made good on after repeatedly exposing Link to public humiliation.

While Holstein is being payed by Presley, at taxpayers expense, to orchestrate a divorce of the, “marriage of the best of our legal system and of democracy, ” the city's liability traces back to Holstien's family who his client, Presley, has treated with little respect.

So herein lays the question, to whom does Hostein's loyalty prefer – his daughter and her husband or Presley?

Justice moves slowly when its execution depends on judicial remedy.


Citizens inexperienced with litigation I would advise this: Settle your differences quickly, seek peace and submit your quest for justice to the almighty who gives freely as even the most righteous position comes at a great price when sought through action in the courts of the United States.