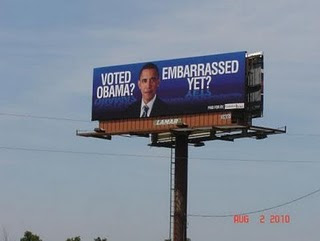 A sign begging the question to those who voted for Barack Obama asking, "Are you embarrased yet?" didn't generate a great deal of direct interaction from the public until KY3inc. published a story on the matter.

Owners Bob Huels and Steve Critchfield received a barrage of phone calls, death threats and a variety of taunts with language not listed in standard dictionaries. In response, Bob Huels penned a post titled, "The Billboard"

The consequences of political speech are often high for businesses and it's uncommon that even a week goes by where I don't here the words of a citizen begging to keep their opinion off the record. After all, they're scared about what the repercussions might be.

The generic word "corruption" seems to have lost meaning but a recent Forbes article, "The New American Corporate State" elaborates on the type of corruption that kills free enterprise and the reason why many businesses are afraid to excersize their constitutionally protected right to speak out when government bodies breach public trust with unholy bonds to private business entities. Unfortunately this trend isn't just occurring in Washington but has infiltrated the policies of Branson's Board of Alderman.

Commercial 1 Brokers made a conscious decision to broadcast a political opinion.  They estimated the cost to their private business for making a conservative stance. Although the billboard on 65 is highly visible, they also serve the community by challenging infringement on private property rights that has been occuring since an anti-business and anti-free market business owner took control of Branson City Hall.

It's been said that the true mark of a man is what he does when no one is looking. Without knowledge of whether a petitioner is Republican or Democrat, Huels makes a point to stand up against anti-business matters at Branson City Hall. In fact, he's the only person who regularly attends Branson's Planning and Zoning meetings serving as a watchdog against overreaching and often illegal legislation.

As for allegations that Commercial1Brokers political statement is racially motivated, when Branson's board of Alderman voted to disallow a black performer (Nelly) from singing outdoors; Huels was one of six citizens with the courage to stand against the unfair infringement on property rights.