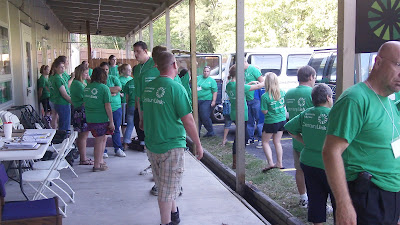 As the ever pressing social and political issue of religions role in society has become a national obsession. Sort out the rhetoric and the American ethic of justice remains.

To the political right Glen Beck theorizes it's the job of the church to provide a social net.  To the political left President Barrack Obama dedicates funds to address the issues Beck claims people of faith have an obligation to conquer. It's likely neither matter to a family of four living on 800 dollars a month with a 600 dollar bill owed to a motel on the 76 strip. It's unlikely they ponder the complexities of national ideology, but they probably know what it's like to be hungry. Mother Theresa said, true poverty is "feeling unloved", and a sack lunch distributed by volunteers once a week likely does more to cure true poverty than the logistics of solving poverty in the community. Some would venture to say, "God is love".

Stalling admits his original ambitions of ending homelessness in Branson were naive but his vision remains vivid.
Perhaps the hipster slogan, "Jesus was way cool", would attract more support than the shocking mantra embedded on the t-shirts Bryan Stallings sells me from the back of a van with the identical slogan, "Jesus was homeless".  On the opposing side of the garment St. Francis of Assisi wisdom is engraved, "Preach the gospel always and if necessary use words".

Branson's peak occupancy has waned as a lull in the tourist season reduces motel occupancy. Still, Stalling attempts to gauge the expanse, reasons and details regarding the population of residents who live in motel rooms often without access to laundry facilities, kitchens and other amenities most of the civilized world takes for granted.  A total of 45 volunteers assembled throughout the day working two shifts in an attempt to generate data so politicians, churches and civically minded individuals can understand the reality of a portion of Branson's workforce living in weekly motels.

The issue is close to many in the communities heart including Mayor aPresley and her political ally Karen Best who has taught workshops on poverty.

The facts are being tabulated and the arguments will follow. Should we build public housing projects? Should we create a public transportation program?

Location was a common answer to the question , "Why are you living in a hotel?" where natives and tourists compete over jobs in a tightening market.

Of all the questions asked one question had a common response, when asked what they were best at they uniformly answered, "I don't know.

The survey comes a day before an estimated 40 social service organizations gather at a Methodist church to help meet the needs of a commonly unseen component of our culture.