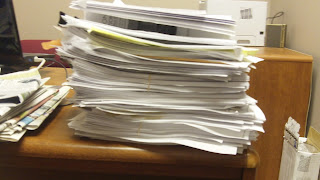 The pile of documents is two months of packets distributed to a small group of media outlets by Bransons City Leaders. Several hundred pages of legislation have been implemented this year.


Obama's health care proposal is dwarfed by the costly changes city leaders have been implementing monthly. The legislative changes this summer triple the entire size of the health care agenda. It's so vast city leaders have little idea what the repurcussions of the massive changes actually mean to the public but the cost to taxpayers is clear. The malfeasance was documented two years ago to no avail. Call it prophesy, fortune-telling or common sense, fiscal irresponsibility at Branson City Hall has taken a major toll and citizens are paying the bill. We've seen tax hikes, utility rate increases and a massive fine increase that will take effect in days as a result from derelict of duty and a "mean girls" club where vital documents are concealed, private businesses are subsidized and finaincial malfeasance has run rampant.

Last week a small piece of land  assessed at 9,000 dollars was purchased by the City of Branson for over $200,000. The payment, which was over 2000 percent of the assessment had both journalists and real estate investors wondering how such corruption was able to occur. The journalism community remained silent except in the backrooms but political pressure and a press release where run as opposed to exploration behind the fool-hearty action. It's my belief that the public deserves better. We have a right to know and we deserve city leadership which serves the people not their private interests. Though the message is becoming clearer, if the citizens demanded open government and integrity from our leaders; this type of rediculousness would never occur.

Commercial Real Estate Broker Bob Huels speculates on the intent of Branson leaders irresponsible spending practices suggesting there may be a gold mine on the aforementioned property we don't know about.

City leaders certainly have a gold mine - the treasury -  which has been drained to subsidize the lifestyles of politicians who are supposed to be protecting our interests.

The press has also played a vital role in allowing corruption to continue. KY3, the largest area media outlet has teamed up with our corrupt leaders to assist with Sunshine Law violations through a financial relationship with the Mayor, helping propagate fraudulent press releases and failing to hold their business partner accountable.

Dishonesty continues throughout the halls through propaganda where departments are told that the Branson Landing is causing a deficit rather than the massive financial windfall that brings new revenue that has been sent through the back door. The Branson Chamber polling estimates 72% of tourists are going to the Branson Landing. Though the Branson Landing will generate $200,000,000 in sales, very few people in Branson are aware. The facts are hidden and propaganda is published at will. Sadly, the Branson Independent has chosen a policy of not labeling "government issued" documents which is tremendously disrespectful to the public. People have a right to know the difference between journalism and regurgitating government issued propaganda.

The paper has a silent partner which is widely believed to be a financial partner of the mayor's personal business.

While the Mayor has raised taxes, utility bills and regressed on open government commitments we've seen an increase in personal trips financed by the city. Though she may enjoy partying across the country on the government dime, the new expenses hardly seem responsible.


Prior to Raeanne Presley's election, we were building our savings. This war chest has been rapidly drained. Since we've had several years of record revenue, due to the success of the downtown development, this hasn't been an easy task.

In conjunction with wasteful and frivolous spending, we've seen the implementation of an anti-business agenda. I'm certain it's difficult to decide whether competition should be allowed to occur. After all, new businesses may mean less sales for an older theater. Theaters and venues that bring new people to Branson don't necessarily help some of the older more outdated businesses. They also help eliminate poverty which means some businesses can't pay the low wages they have in the past.

The newest attack on business is in the fee department. In an effort that could discourage new business, fees could be raised several hundred percent. A meeting scheduled tonight will help identify those in opposition to the business tax. Notice was posted exactly 72 hours in advance, the minimum allowed by law.

Business leaders that don't want to see the furtherance of an economy crushing agenda might want to show up. It's unlikely that your presence will make a difference in stopping the new wave of business tax increases , but you could get a nice bribe via donation to your business or through one of the Mayor's lobbying groups, funded with tax dollars without all of those pesky ethics barriers.

If nothing else, you can see Branson's top show featuring the most expensive production and art of illusion first hand. The show starts at 5:30 at Branson City Hall tonight.