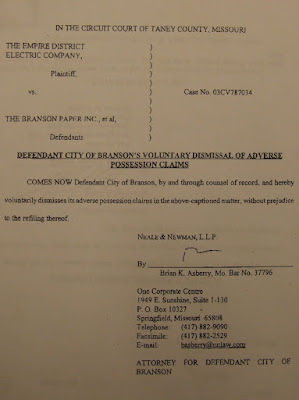 In 2004, Attorney Brian K. Asberry of Neale and Newman filed a voluntary dismissal of adverse possession claims as a defendant against Empire. The document was filed two years after Empire District Electric sued the City of Branson and Douglas Coverdell to quiet title on land, some of which is now part of the Branson Landing project. In the document above Coverdell's interest is abeled THE BRANSON PAPER INC. 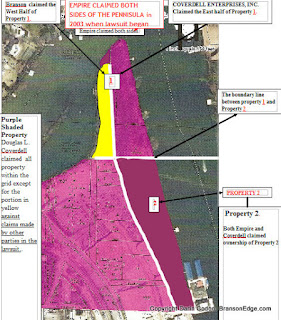 The case was bifurcated as Coverdell didn't object to Branson battling empire over the west side of the pennisula (highlighted in yellow) . Branson, understanding attempts to take more land in the grid would be unfruitful backed out of the case. During an appeal Branson was asked if they were claiming ownership of the land in question. Branson responded, "No sir, only through a lease agreement with Empire'.

Provably impossible to argue without a former Supreme Court Justice, the assertion is demonstrably wrong. Legally Branson is in a pickle which colors the case.

Branson has to prove Empire District Electric owns the land (playing Appellant and Defendant) and at the same time haven't plotted with Empire to protect themselves from exposure from a lawsuit that hasn't been discussed in the press.

In a lawsuit separate from the Branson Landing land dispute , Coverdell alleges the  City of Branson and Empire District Electric conspired to steal a plot of land he owns on the Taneycomo lakeshore.

The photo posted below this paragraph was shot from a small digital camera during a Taney County Trial where ownership of the title was heard by local citizens. The focus of the jury trial centered around North Beach Park follwing Coverdell's claim to the property through chain of title. On the photo shot Jan 12, 2010 Branson City Attorney Dub Duston and Branson's hired gun Brian K. Asberry listen to pre-trial proceedings at the Taney County Courthouse. 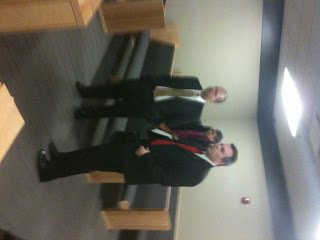 During opening arguments, Coverdell's counsel would mention the city of Branson had legal counsel present. According to the Southern District Court of appeals the mention wasn't enough evidence to prove Branson was aware or participated in the trial; however Branson's Board of Alderman met with Empire District Electric on dozens of occasions and continued to provide funds for legal counsel to assist Branson in the property dispute. Empire District Electric's attorney's promised Branson leaders that they could handle Coverdell. Disputing the adage ignorrance isn't a proper defense; Branson succesfully argued to the Court of Appels that they were uninvolved and unaware of the lawsuit from 2004 to 2010 despite an orgy of evidence contradicting the claim.

Branson proceeded to develop the Lake Taneycomo waterfront raising the property value by millions of dollars. While a long trail of documentation details requests the 38th Circuit court straighten out the property dispute, contracts drafted with the help of Branson City Attorney Paul Link and Mark Fletcher created a workaround. In order to get loans on the Branson Landing property, contracts were signed stating that the property in question wasn't currently in litigation. Bank of America would file with the Missouri Court of Appeals claiming they have a $90 Million interest in the property granted to Coverdell by the Taney County Jury. To put a wrench in the verdict Missouri's Court of Appeals would overstep their usual bounds, recognize that Branson didn't comment during jury selection ( Branson counselors were some of the few people present) and never made any formal motions during trial.

What wasn't addressed was that between 2004 and 2010 Branson would create a new lease with Empire on the property in question, testify no legal action was currently impeding transfer of land, create a Tax Increment Finance (TIF) district as part of a plan to develop the Branson Landing and hold scores of meetings with Empire District Electric and discussing means to workaround the lawsuit.

The two lawsuits, one over land, the other alleging conspiracy are important as winning one cedes favor to a loss in the parallel lawsuit.