Branson's Leaders Play Hide the Money From the Public 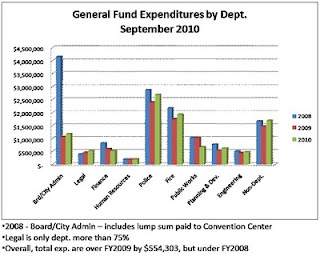 Branson City Officials don't want any scrutiny and have taken firm action to prevent media outlets from obtaining information about a $4,000,000 dollar expense marked as a line item for the mayor and Branson Board of Alderman gifted in 2008.

For six weeks, during three open meetings, the Mayor and Board of Alderman have received requests for all documentation regarding the unusually large line item graphed above.

Since taking office, under Branson Mayor Raeanne Presley watch, over $10 million in cash reserves have been drained opposing a positive cash flow trend of preceding administrations.

While Branson's economy and tax base has seen huge gains, unusual spending patterns have prevailed. Presley has been using public funds for a variety of new expenses which include political polling and an upcoming plan which will enable the Mayor to serve a "presidential length term". Offical business, usually handled by department heads is commonly routed to the mayors personal communication lines.

Currently, the mayor serves a two-year term, under the new plan, the mayor will serve a four year term and extended authority not currently allowed by law.

A record $1.7 million has been spent in litigation (this includes fiscal 2011 projections) over the past three years, outside of the city's staff legal counsel. A new legal structure states that Branson Legal expenses can be used to support the mayor and board privately as opposed to the corporate interests of Branson.

Sunshine Law violations, including a rejection of information regarding the expense above have are consistent, common and have been an effective tool in blocking public access to the methods Presley is using when determining where public funds should go.

Since taking office all department heads with the exception to two have been fired to bringing a team loyal to the mayor personally.

Presley is a business partner with KY3inc and is engaging in fiscal transactions with media outlets that currently cover Branson as opposed the the journalistic imperative that the press should be serving the public. One reporter suggested their were extreme financial consequences of challenging the administration begging his/her name stay off the record.

On Thursday November 4th, a physical copy of the request was brought to city hall, Branson officials stated that access to Branson City Hall would be denied to the public information office due to the fact an escort was not available.

The threat of terror to businesses, press outlets and citizens who ask for answers has been an effective means of blocking challenges to an administration writhe with corruption birthing devastating financial consequences to future generations.

Though these question and violations to the state constitution will be challenged, Presley's lack of honor to the veterans who have fought and died for freedom which includes the right to a free press has been an effective means of slowing publications.

Media Outlets interested in obtaining nformation regarding the denied equests can call (417) 268-7880.
Prepared by: Unknown