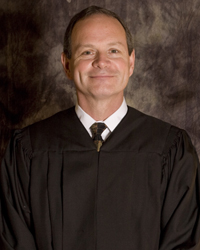 Hollister, Mo - Municipal Judge and private-practice attorney Randy Anglen recently finished authoring and is now publishing the story of his fight to gain access to his son who was kidnapped by his Chilean mother to her native country.

A brief excerpt from Anglen book "Kidnapped to South America':

"I have heard enough," said the Chilean judge. "Bring the child into the courtroom."

Sandra’s attorney left the courtroom to get Christian. I had not seen my son for four months—since Sandra abducted our son to Chile. He was now 23 months old. I wasn’t sure he would still recognize me.

Sandra’s sister, Angelica, brought Christian into the courtroom. She placed him on the floor, ten feet in front of Sandra and me, then turned and left. Little did Angelica know that she had set up the little game that Sandra and I had played many times in the past. Faced with a choice to go to Sandra or me, Christian ran straight into my arms, just as he had always done before.

More information about Anglen's book is available on his website http://kidnappedtosouthamerica.com/

********
Traditionally, the heinous crime of parental kidnapping  is conducted by women. However, the most recent list published by the FBI includes a number of men who have acted maliciously to cause undue harm to innocent children and families.

Unfortunately, justice in America, and abroad, often comes at a high price.

You can help. Be on the lookout children and unscrupulous parents who choose to take part in this violent act. The FBI's most wanted Parental Kidnappers is regularly updated here:
http://www.fbi.gov/wanted/parent/parent.htm