Everyone is innocent until proven guilty even police officers and street lurkers. In this case we have both - but first: let's look at the Branson Daily Independent over the weekend.

At the bottom of this story I have printed the journalistic code of ethics.This shows what you can expect from a newspaper - unfortunately we can longer expect this standard from the Branson Daily Independent.

China, Iran and other dictatorial regimes require newspapers to print stories without telling the public who produced them (they tell the press what to say and pretend it's researched ).

Government entities are a huge asset and resource for journalists. Press Releases can be helpful; but when press releases fill the newspaper unmarked, the public endures harm. It's dishonest to the core and disrespectful to the community. The public thinks they're reading a newspaper but really it's only what the government wants you to know - and tells the newspaper to print.

The public has a right to know when a story is written from research, true reporting , and one is published from - fact finding - a public resource that serves as custodians of fact. The majority of the Branson Daily Independent editions now contain unlabeled press releases  a cover story and a show review. It also happens to be the most widely distributed newspaper in Branson.

Today the Branson Daily Independent proved themselves a poor custodian of fact by printing information they did not verify. The BDI has been doing this for years. And while it's helped them reduce their staff by 75% (When the government writes stories for you; you don't have to pay employees). The story has no author and no byline making the public believe the newspaper created the story. Page three has a story from Gary Groman written five years ago and one that has been printed 9 times (sometimes they just need copy to fill the space). Page seven is where the ethical dilemma begins.

If you pick up Sunday's and turn to page 7 you'll see this story published here last week about the Branson Airport below. It's the exact same story - verbatim. But there is a big difference, while the linked story tells you that you're reading a press release - the newspaper story would make you believe a writer at the paper researched the story. Not only is this dishonest, it's a violation of the code of ethics. Moreso, the hundreds of falsely labeled releases last year help corrupt politicians. The paper has produced hundreds of articles written by politicians and have distributed these to the public giving them the false impression they come from a disinterested source. Allowing politicians newspaper print without attribution works against democracy and the goal of the press which is to , "give us the information we need to be free and self governed." 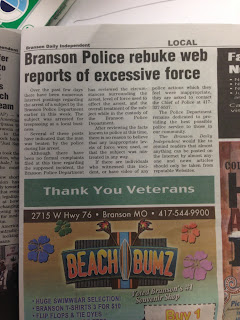 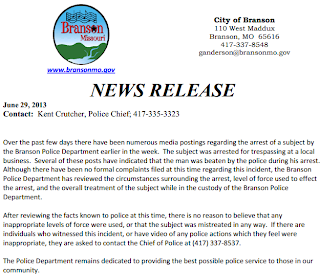 You'll notice both articles have the exact same verbiage - word for word the newspaper printed the press release. Here's the difference, Branson Police Chief Kent Crutcher prints his name. The Branson Independent makes it look like the newspaper authored it. This is precisely how newspapers help corrupt politicians get re-elected.

Labeling the opinion with his name and contact info is an honest means of distributing information. The Branson Daily Independent however, re-published the press release without identifying the entire story is written by the police chief. The newspaper did no research, no fact finding and no journalistic method. While reprinting the official story from the Branson Police Department without adding or checking any facts they disrespect those who fought for our right to have a free press. Underneath the atrocity the newspaper prints - thanks Veterans.

Outlandish Opinion: Perhaps next time they should burn a flag instead - it might be less offensive to an educated public.

The Branson Daily Independent broke the code of ethics no less than 15 times in one edition of the newspaper. Failure to adhere to the code of ethics amplifies the reason media outlets are losing trust with the public. Be careful what you read, it might be this Sunday's Branson Daily Independent - A newspaper which doesn't disclose nor chooses to be independent from the politicians who run ads in their paper. Remember, anyone can print a newspaper - only trust outlets who follow the journalistic code of ethics. Ask the newspaper to disclose the sources of their stories - ask them to return to ethical reporting.

On June 26th, 2013 a phone call was made to the Branson Police Department by the manager of Country Mart on 248 in order to have a homeless man removed from the premises. The Country Mart employee proceeded to press trespassing charges against a man known by locals as "Tex".

Tex, whose real name is Justin Dayle Squyres, was confronted by the police officer and as the situation developed was forcefully taken into custody.

Onlookers voiced concern about the incident and the Branson officer's treatment of Squyers.

One observer recorded the event on video and immediately brought the footage to a detective at Branson City Hall. The video footage was logged and preserved by a Branson Police Department detective and is in the process of being submitted as part of a package for the Taney County Prosecutor's office as potential evidence for the prosecution. The Taney County Prosecutor, Jeff Merrill will determine whether or not the state proceeds with the case.

While prosecutorial discretion is theoretically a determining factor , cases are generally rubber stamped for judicial review. Branson PD suggests Squyres should be charged with.

Due to the nature of charges suggested by the Branson Police Department, the initial venue will be the 38th District Taney County. The defense has signaled they will ask for a change of venue which will likely by set in Christian County, the northern boundary of Missouri's 38th Circuit Court. Missouri law allows a change of venue or a change of judge at defense request.

Squyers was briefly detained by the Branson Police Department before a prominent businessman, Pat Joyce paid his bail and arranged for temporary lodging.

During a conversation following the event Joyce lauded developer Rick Huffman for joining him in making substantial contributions to assisting the homeless. Joyce and Huffman believe taking care of the needy is a Christian imperative. They have invested tens of thousands of dollars to the cause without public mention.

Compounding public outrage is the understanding Squyers has been diagnosed with Autism. Financial support for treatment and elimination of Autism ranks high with the Branson community and has put a group of citizens on the defensive.

A change in leadership at Branson City Hall has greatly changed the dynamic of information flow to the press. Several years ago, Branson Mayor Raeanne Presley entered into the media industry. A sitting State Senator doubled as legal counsel taking payment to help Presley enter an agreement with Shurz communications. Shurz owns two of the top Southern Missouri regional media outlets - KY3 and KSPR. Unfortunately, the press liaison to the 38th Circuit, has blocked access to public resources and has worked vigorously to assist Presley in maintaining office by failing to report basic happenings with Branson Public Funds.

In other words, basic information that was once reported by a watchdog press has ceased. Payments from our Mayor to the press outlets have skyrocketed - and while honest disclosure has not occured - it's estimated the payouts are in the millions. One Branson based reporter claims the newspaper editor asked her to "back off of Branson". A hard story could cut off funds from Presley's cache of media payouts - alienating the paper

While city meetings were being published by private companies free of charge prior to Presley taking office a $200,000 taxpayer funded press room has been established. Most outlets publish these unedited and without confirmation.

With every report, KY3 and KSPR note: "The City of Branson is Committed to Open and Honest Government". Ironically, these entities fail to disclose the politician pushing the story is actually a business partner.

Journalistic Code of Ethics
1— Test the accuracy of information from all sources and exercise care to avoid inadvertent error. Deliberate distortion is never permissible.
2— Diligently seek out subjects of news stories to give them the opportunity to respond to allegations of wrongdoing.
3— Identify sources whenever feasible. The public is entitled to as much information as possible on sources' reliability.
4— Always question sources’ motives before promising anonymity. Clarify conditions attached to any promise made in exchange for information. Keep promises.
5— Make certain that headlines, news teases and promotional material, photos, video, audio, graphics, sound bites and quotations do not misrepresent. They should not oversimplify or highlight incidents out of context.
6— Never distort the content of news photos or video. Image enhancement for technical clarity is always permissible. Label montages and photo illustrations.
7— Avoid misleading re-enactments or staged news events. If re-enactment is necessary to tell a story, label it.
8— Avoid undercover or other surreptitious methods of gathering information except when traditional open methods will not yield information vital to the public. Use of such methods should be explained as part of the story
9— Never plagiarize.
10— Tell the story of the diversity and magnitude of the human experience boldly, even when it is unpopular to do so.
11— Examine their own cultural values and avoid imposing those values on others.
12— Avoid stereotyping by race, gender, age, religion, ethnicity, geography, sexual orientation, disability, physical appearance or social status.
13— Support the open exchange of views, even views they find repugnant.
14— Give voice to the voiceless; official and unofficial sources of information can be equally valid.
15— Distinguish between advocacy and news reporting. Analysis and commentary should be labeled and not misrepresent fact or context.
16— Distinguish news from advertising and shun hybrids that blur the lines between the two.
17— Recognize a special obligation to ensure that the public's business is conducted in the open and that government records are open to inspection.