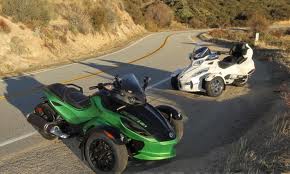 It's not your classic Radio Flyer but the more intimidatingly labeled Spyder tri-motorbikes that will be deployed by 6 officers of the Branson Police Department.

Here's the official word from the City of Branson:

Branson Police adds CanAm Spyder Motorcycles to fleet Branson will be the first police agency in Missouri to use these motorcycles.

The Branson Police Department has taken delivery of two CanAm Spyder motorcycles to add to their fleet of patrol vehicles. Branson PD will be the first police department in the State of Missouri to use these three-wheeled vehicles for police work.

They ultimately decided on the CanAm Spyder vehicles because of several factors. “The CanAm vehicles offer better stability on the hills of Branson, and better safety ratings than traditional two-wheeled motorcycles” Chief Crutcher said.


Another benefit of the CanAm is that the time required to train the officers in the operation of the vehicles is less than traditional motorcycles. Six officers have been selected to receive in-house training before beginning to patrol the Branson streets on the new vehicles

The trikes are fit for off-road terrain increasing the capacity of the department to reach remote areas.
Prepared by: Unknown