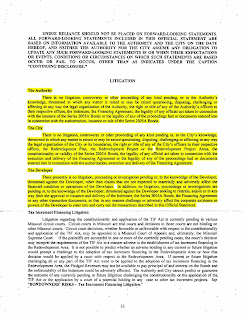 The accusations posed by HCW Development Company LLC are serious claiming negligence, misrepresentation and/or fraud reached the standard of "Tort".

HCW Development is seeking damages  for 1. Vexation Refusal 2. Breach of Contract and 3. Negligent Misrepresentation. HCW is seeking a minimum of $25,000 for each charge setting a floor of $75,000 which could elevate to millions as damages outlined in the court petition are calculated.

Empire District Electric, The City of Branson and HCW Development  claimed the Branson Landing wasn't involved in litigation as they were seeking a third round of funding. The image posted to the left (click to enlarge) is taken from page 33 of the official statement asking investors for $18,560,000.

While the City of Branson and Empire District Electric claim ignorance to litigation - they were not only aware but in the case of Empire were mutual aggressors seeking quiet title action to secure the first round of funding.