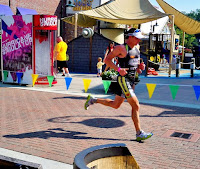 Motorists traveling in and around downtown Branson and north of Branson on Sunday, September 18 are urged to be aware of several street and road closings during the Ironman 70.3 triathlon. The road closures will occur periodically between the hours of 6 a.m. and 3 p.m. Ironman is expected to draw over 1,000 competitors who will swim, bike and run a 70.3 mile distance. Several thousand visitors are also expected in the Branson area to watch the Sunday event. Route 465, also known as the Ozark Mountain High Road, will be closed between 6 a.m. and 2 p.m. Sunday. In addition, MoDOT will work with the Highway Patrol, Taney County Sheriff's Department and Branson Police
Department to regulate traffic at key intersections where traffic signals will be turned to flash. Police officers will direct traffic until the bicycle riders get through the intersections. The bicycle race will be run on state roads (with two loops on Route 465 only), county roads and city streets Sunday morning and early afternoon when traffic is lightest. The bicycle leg of the Ironman will begin on Route 265/165 at Moonshine Beach after competitors finish a 1.2-mile long swim in Table Rock Lake. Bikers will cover 56 miles on a course laid out along Route 265/165, Route 76, and Route 465, the west outer road of Route 65, Route 248 and Business 65. The finish is at Branson Landing. Law officers will direct traffic at these state road intersections where traffic signals will be put on flash:  Route 265 and Route 165  Route 265 and Route 376  Route 265 and Route 76  Route 465 and Route 76  Route 248 and Shepherd of the Hills Expressway  Route 248 and Gretna RoadInside the city limits of Branson, riders will go through the Stockstill Park trail to Skaggs Road, through the roundabout and into Belk’s parking lot at Branson Landing. Branson police officers will be stationed at the roundabout to halt traffic as the bikers ride through. At Belk’s, the competitors transition to a half-marathon (13.1 run) and head south where the course includes:  Branson Landing boardwalk path  Bass Pro parking lot  Lakeside RV Park  Canal Street  Alexander Park  Sunset Park The athletes then return to Branson Landing in reverse order and run the course two more times ending the triathlon in front of the big fountains on the Landing’s Town Square. Branson police officers will also be at intersections to monitor motorists and runners during the race. Driving delays are expected in a number of areas in and around Branson during the competition. Drivers are encouraged to find alternate routes to avoid the bicycle and running course.
Prepared by: Unknown