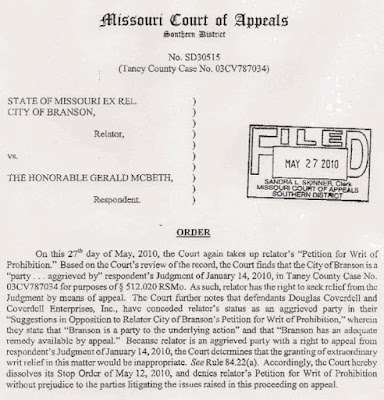 An effort funded by Branson City Officials to undo a Taney County jury verdict affirming Doug Coverdell as the rightful owner of land which includes a large portion of the Branson Landing was quickly thwarted by Missouri's Court of Appeals.

Contrary to statements made by Branson officials, the Court of Appeals confirmed the City of Branson was a party to the initial lawsuit that granted Coverdell land with an estimated value exceeding $250,000,000 and didn't qualify for special relief.


*****This story was held 20 days to see if any media companies would cover the story.