Israel exchanged 1,024 prisoners for one soldier who was  held by Hamas since June 2006. The 25 year old Gilad Shalit was returned last night and the first wave of Palestinians, totaling 450, were returned last night via Cairo, Egypt. Israeli Prime Minister Benjamin Netanyahu delivered the following statement published below without edit after the return of Shalit. 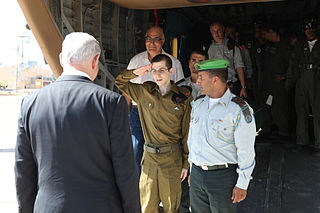 Citizens of Israel, today we are all united in joy and in pain.


Two-and-a-half years ago, I returned to the Prime Minister’s Office.  One of the principal and most complicated missions that I found on my desk, and which I set my heart to, was to bring our abducted soldier Gilad Shalit back home, alive and well.  Today, that mission has been completed.
It entailed a very difficult decision.  I saw the need to return home someone whom the State of Israel had sent to the battlefield.  As an IDF soldier and commander, I went out on dangerous missions many times.  But I always knew that if I or one of my comrades fell captive, the Government of Israel would do its utmost to return us home, and as Prime Minister, I have now carried this out.  As a leader who daily sends out soldiers to defend Israeli citizens, I believe that mutual responsibility is no mere slogan – it is a cornerstone of our existence here.

But I also see an additional need, that of minimizing the danger to the security of Israel’s citizens.  To this end, I enunciated two clear demands.  First, that senior Hamas leaders, including arch-murderers, remain in prison.  Second, that the overwhelming majority of those designated for release either be expelled or remain outside Judea and Samaria, in order to impede their ability to attack our citizens.

For years, Hamas strongly opposed these demands.  But several months ago, we received clear signs that it was prepared to back down from this opposition.  Tough negotiations were carried out, night and day, in Cairo, with the mediation of the Egyptian government.  We stood our ground, and when our main demands were met – I had to make a decision.

I know very well that the pain of the families of the victims of terrorism is too heavy to bear.  It is difficult to see the miscreants who murdered their loved ones being released before serving out their full sentences.  But I also knew that in the current diplomatic circumstances, this was the best agreement we could achieve, and there was no guarantee that the conditions which enabled it to be achieved would hold in the future.  It could be that Gilad would disappear; to my regret, such things have already happened.

I thought of Gilad and the five years that he spent rotting away in a Hamas cell.  I did not want his fate to be that of Ron Arad.  Ron fell captive exactly 25 years ago and has yet to return.  I remembered the noble Batya Arad.  I remembered her concern for her son Ron, right up until her passing.  At such moments, a leader finds himself alone and must make a decision.  I considered – and I decided.  Government ministers supported me by a large majority.

And today, now Gilad has returned home, to his family, his people and his country.  This is a very moving moment.  A short time ago, I embraced him as he came off the helicopter and escorted him to his parents, Aviva and Noam, and I said, ‘I have brought your son back home.’  But this is also a hard day; even if the price had been smaller, it would still have been heavy.
I would like to make it clear: We will continue to fight terrorism.  Any released terrorist who returns to terrorism – his blood is upon his head.  The State of Israel is different from its enemies: Here, we do not celebrate the release of murderers.  Here, we do not applaud those who took life.  On the contrary, we believe in the sanctity of life.  We sanctify life.  This is the ancient tradition of the Jewish People.

Citizens of Israel, in recent days, we have all seen national unity such as we have not seen in a long time.  Unity is the source of Israel’s strength, now and in the future.  Today, we all rejoice in Gilad Shalit’s return home to our free country, the State of Israel.  Tomorrow evening, we will celebrate Simchat Torah.  This coming Sabbath, we will read in synagogues, as the weekly portion from the prophets, the words of the prophet Isaiah (42:7): ‘To bring out the prisoners from the dungeon, and them that sit in darkness out of the prison-house.’  Today, I can say, on behalf of all Israelis, in the spirit of the eternal values of the Jewish People: ‘Your children shall return to their own border [Jeremiah 31:17].’  Am Yisrael Chai! [The People of Israel live!].
Prepared by: Unknown