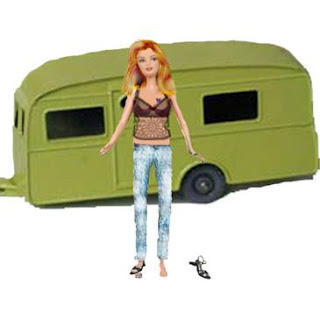 The Eastern Taney County Girl is a species like no other. Perhaps, women are  bred  similarly in other parts of rural North America, however;  I haven't spent enough time outside of Urban and Suburban America to offer a solid conclusion about the matter.

What  makes an Eastern Taney County Girl  unique is her affection towards what I term the Hillbilly Arts. These include hunting, fishing, caving and mudding (aka offroad path-finding)

Vehicle  - First Date
While the Los Angelean variety (which I'm most accustomed to ) tends to gravitate towards gentlemen sporting Porsche and Mercedes; The Eastern Taney County Girl is likely to find most comfort in a vehicle equipped with off-road capacity. On a whim, she can be easily entertained by a bumpy ride through the Ozarkian hills known as knobs which stretch a good 60 miles continually in most every direction from the Taney County Seat. .

More than the  style, year, make or model is the  importance of the drivers capacity to navigate puddles, small streams and rocky steep terrain. In fact, a successful excursion off road is likely to enable the driver to accrue a second date.

Fishing - Second Date
If you listen carefully, the Taney County Girl will divulge a wide array of fishing secrets should you succeed at gaining her affections with your master navigation through the outer hills. Her knowledge of fishing techniques is gleaned from the wider culture around her. If your first date lacked conversation about fishing (which would be a big mistake) you can successfully recover from finding a rural gas station with a small cafe. Generally, every Eastern Taney County municipality has at least one.


Taney County Council of Elders
Within the confines of the gas station, without exception, will reside a council of elders. The council of elders is a group of elderly retired men, generally wearing overalls or worn in dungarees, who play a game called "first liar loses". When one of the elderly men submits a statement about an achievement or accomplishment each one in the group will one-up with statement with a more outrageous claim to his manliness or blessing. For instance, if the first spotted a six-point deer in a field across from the gas-station, the second will have seen an 8 point deer. Should three men in the council of elders be present a 10 point deer is something he undoubtedly spotted before any other of the men in the group. Thus, the first exaggeration is put to shame however trivial the statement might be. The game will continue throughout the afternoon until the establishment shuts down or their wives have finished preparing a proper supper.

A successful interaction with the council of elders can be profitable indeed; particularly if your ambition is to successfully court an Eastern Taney County Girl. When it comes to local knowledge, especially pertaining to the Hillybilly Arts, their brain's index is greater than google, contains more phone numbers than the local yellow pages and more precise than the springtime clockwork bloom of the redbud tree. The key is to have the council of elders compete to provide the best fishing spots, hunting grounds and cave locations. Ask the council correctly and you will yield a massive repository of who, where, when and how to traverse locations not ordinarily available to outsiders.

Second Date
After the proper knowledge is obtained you are ready to re-engage and Eastern Taney County Belle. Politeness must be balanced with a rugged appreciation for boundry. Creature comforts are appreciated and your vehicle should be properly armed with blankets, ignition device (lighter, flint/steel or match), snacks (marshmallows are a bonus) fishing gear, flashlight, firearm, can of gasoline and emergency preparedness kit.
The Eastern Taney County Girl is most comfortable near a freshly struck fire and will likely partake in consuming freshly caught fish. Beverages are must since you'll likely come to a point in the evening where you are far from civilization. .

If your excursion involves hunting or fishing it's important to set the Eastern Taney County Girl up correctly by ensuring she makes a slay. She will never forget the man who she was with when she killed a deer, turkey or large fish and her affections will be earned forevermore. A new cave is equally memorable as is a bonfire should your skills in the Hillbilly arts be limited.

A small subset should be approached with caution and at all costs should be avoided. Though I have yet to coin a proper term for this dangerous group of Eastern Taney County females, if there was a Barbie Doll for the subset, she would be overly tattooed, come with a trailer, meth lab,  ex-boyfriend prison Ken who could be traded in for welfare Ken in three to five years.